“My mother said I always liked to argue,” observed Georgia personal injury attorney Charles Scholle while reflecting on why he became an attorney. Of course, it’s not quite that simple. “It’s a precise profession and that precision fits with my personality. I like to help people and I like to win.”

On the first day of law school at the University of Georgia School of Law, Charles witnessed the Socratic method—a teaching technique in which a professor randomly calls on a student and assails them with complicated and rapid-fire questions about the reading material to trip them up and poke holes in their responses.

Charles understood right then that law school would be different from undergraduate school.

“There was going to be some people who weren’t going to make it,” Charles said. “It was a rude awakening as far as the expectations of what you were expected to do and be prepared for every day. I still keep that mentality today.”

Following law school, Charles founded the Scholle Law to focus on personal injury and wrongful death cases. There, Charles gets to use his lifelong love of arguing to win BIG cases.

In 2019, he represented a woman who went blind after getting surgical antiseptic in her eyes during her surgery. Though doctors denied any wrongdoing and other attorneys refused to take her case, Charles and his team were able to get her a $14 million verdict.

Fun fact: Charles was named one of Georgia’s top 100 trial lawyers and is a member of the Million Dollar Advocates Forum.

Somehow, Charles finds the time to serve in leadership roles in professional and community organizations including Mothers Against Drunk Driving, the Traumatic Brain Injury Litigation Group, the Liquor Liability Litigation Group, the Motorcycle Litigation Group, and the Atlanta Bar Association. His participation in such a broad range of groups is perhaps representative of his uncanny ability to understand issues from several different perspectives.

When describing what makes a good attorney, Charles was quick to point out the need to “expand your ideological spectrum to see your opponent’s side of the case, even if you feel your opponent is morally wrong in their stance.”

“Great attorneys don’t just see their side of the case, they can see it from the perspective of opposing counsel. The judge will see both sides and may look more favorably on your opponent’s side and if you fail to consider the merits of your opponent’s side, then you’ve failed your clients as a lawyer.”

Charles works hard, and he plays hard. He’s an early riser and spends those early morning hours handling emergencies over email before heading into the office where he might spend the day running staff meetings, participating in hearings, attending client meetings, and preparing for trial.

After coming home for dinner, he typically retreats to his home office to work for a few more hours before bed.

“The days are long and busy, but it’s all very satisfying at the same time.”

Though he works hard, Charles understands the importance of his non-work time during which he can generally be found spending time with his wife and children—4 sons who keep him busy with their diverse interests ranging from sports to nature. “I try to spend as much time as I can exploring their interests,” Charles said.

Charles wants injury victims to find the right legal help, whether that means him or some other lawyer.

What’s more, Charles encourages injury victims to remember that it’s important to be comfortable with the attorney they hire. “In medicine, they call this bedside manner,” Charles explained before emphasizing the importance of finding an attorney that you feel comfortable with and confident in the knowledge that they’re fighting for you. Otherwise, “you should look elsewhere.”

After getting to know Charles, we here at Enjuris have our doubts that anyone would “look elsewhere” after meeting with him.

Q: What’s the hardest part of your job?

A: The hardest part of my job is dealing with the administrative part of running a law firm. I’d like to practice law all day. However, because the firm is also a business, it’s sometimes necessary to deal with HR matters, tax matters, broken coffee machines, and employee emergencies. That’s the biggest challenge!

Q: What’s the most rewarding part?

A: Without a doubt, the most rewarding part of my job is closing a case with a great result and satisfying a client who is happy with the work you’ve done, who believes you’ve had their best interest at heart, and represented their case to the best of your abilities. If the client feels like we had a good outcome for their case or if they understand that we did the best possible job for them under the circumstances, that’s most rewarding.

Q: Is there anything you wish clients understood better before their first appointment?

But lawyers can’t overcome bad facts and bad evidence. Any lawyer can handle a slam-dunk case, but can they get the best possible monetary result for a client? That’s where having a confident, knowledgeable attorney can make a big difference.

A: Injury victims often think that because they’ve been hurt and because someone else is at fault, they will simply achieve justice. It’s more complicated than this. There are many factors in any case that are outside the lawyer’s control, such as the amount of insurance, the availability of evidence, the makeup of the jury, the judge, and the venue. Moreover, jurists sometimes come into the courtroom with bias and they don’t want to listen to your side of the case.

People need to understand there’s bias or prejudice against personal injury attorneys and clients, and that really affects the outcome of many cases.

Our job is to overcome this bias so that our clients’ cases can be presented honestly. Defense attorneys have a caricature of plaintiffs and their attorneys, and they push that caricature in court. Clients get upset when they’re characterized that way when they have an injury that wasn’t their fault, they just want justice.

Q: Do you have a favorite fictional attorney from books, TV or movies?

A: I think that what I do in the law and what lawyers do is a lot different from how it’s portrayed in the movies, and I don’t think the movie portrayal is very accurate. I’ve seen the movies and read popular lawyer-based stories, and I spend more of my time trying to undo these perceptions people have from movies and books. We need to deprogram people about what the law actually is so that they can better understand their case and how we can fight it together. Film and fiction just don’t capture it accurately.

Scholle Law is powered by a team of personal injury and wrongful death attorneys committed to providing the personal attention and results you deserve. With offices in Duluth, Atlanta, and Decatur, the Scholle team has recovered over $75 million for clients in lawsuits and insurance settlements involving medical malpractice, commercial vehicle accidents, wrongful death, brain injuries from auto accidents, and motorcycle accidents. Charles Scholle is included in the National Top 100 Trial Lawyers, Million Dollar Advocates Forum, and Georgia Trial Lawyers Association, along with additional honors and memberships. View our Enjuris profile and visit our website today. 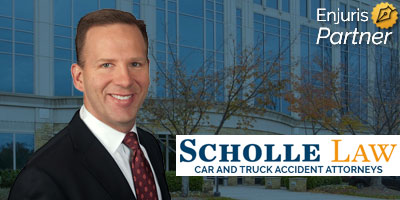